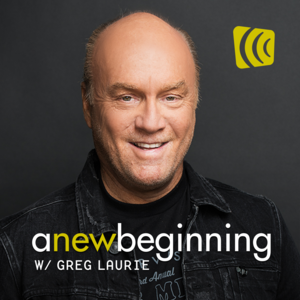 From the Archives: Greg Laurie Interviews Will Graham

From the Archives: Greg Laurie Interviews Will Graham

In this interview from the archives, pastor and evangelist Greg Laurie sits down with Will Graham, son of Franklin Graham and grandson of Billy Graham. Will discusses his grandfather Billy Graham, his own travels, and also how he entered the ministry himself.

This discussion originally took place on the evening of December 12, 2013.

Pastor Greg Laurie's new book, Billy Graham: The Man I Knew, takes an in-depth look at his relationship with the great man while revealing the human side of Graham and his impact in history. Receive a copy when support this podcast by going to harvest.org/support.

The Biblical Worldview on Overcoming Fear & Worry: The Peace of God
A New Beginning
Greg Laurie

The Biblical Worldview on Overcoming Fear & Worry: Worries Into Prayer
A New Beginning
Greg Laurie
Important Note: These transcriptions are generated automatically and aren't perfect. We have generated them and made them available to aid in search and accessibility to the shows on our network. While we are constantly working to improve the technology and accuracy, we can't respond to requests to fix errors at this time.

Everybody Greg Laurie here. You're listening to the Grigori podcast and my objective is to deliver hopefully compelling practical insights and faith culture and current events. From a biblical perspective to find out more about our ministry's go to our website harvest.org so thanks for joining me for this podcast but we also have a guest speaker this is the young man I've known since he was just a wee little boy and his name is Will Graham now will is the son of Franklin and Jean Graham and he is the grandson of Billy Graham and will also travels around the world like his dad like his grandfather and preaches the gospel. He also was the director of the Billy Graham training center at the Cove in Asheville, North Carolina. Great place to go and study the Bible, but God is will he put his hand on will and it's been so exciting to see how the Lord has just got him ready for the work he's called on to do and.before Bill welcomes him speaks tonight. I thought it introduce them to you. So let's welcome Will Graham will come on out to have you now will with a lot of people in the wondered about how your grandfather is doing, it's in the news that your father is asked that people be in prayer for Billy so what is his status. How is his health right now and my grandfather.

I know back in November 7 turned 95 and that he's actually been in the best way to describe it is just old and his this is that only birthday. His health started to turn for the worse. There's nothing actually wrong with them is just old and so there's nothing medically wrong, but just old age and his life is starting to turn, but my grandfather always said you one day you will hear the Billy Graham is dead and he said this is not what my grandfather said he said one day you will hear the Billy Graham is dead. He said, but don't believe it. He said her on that day, I'll be more alive than any other time in my life. Life traveling the world preaching and just had this great outreach in the United States and was on the Fox news channel and also in thousands of homes around the country called my hope America and he probably reached as many people as these reach a long time and one night using media didn't they did. And this is when this is all because what God been doing and know how how the role with Fox News ever put some like to sound out on their television yummy, wonder how in the world.

Well this is this is why this type of God that we serve because God introduced my grandfather to Rupert Murdoch in 1959 in Melbourne Australia when Rupert was a nobody.

He is a owner of the real jocks. New sky news in Europe and in the UK and and he said he is in Ozzie from Melbourne who took over as his father's business, who just died and my grandfather went there 1959. They had a businessman's line and little round table and my grandfather sit beside him. That's how Rupert Murdoch and Billy Graham Mentos all these years that and now represent you. We want to put this on our our our programming and we said thank you so much and your dad told me Franklin, your dad told me that 55,000 people made a profession of faith that they know about one night from that broadcast going out of the 55,000 people got faith so well tell us tell us about yourself not knowing of you been married have been married we celebrate 15 years. Congratulations, you have three children. Children now. Did you always feel this because you know you're the grandson, the Billy and the son of Franklin that you can end up as a preacher or that you cannot fight that are what know I got never fallen but my mind there is no pressure. Let anyone of there's always pressure to be a preacher and evangelist and my dad did very good at protecting us from that he did because he got that pressure, yet he didn't want his own children to have that bridges the data protected is for example when you start to get the college to say we want will the common speaker will and I was really speaking at the time but you will what we will will and the debts that you can ask him unless you asked me for and so then after a time, dad said no will make up his own mind on that stuff that dad always protected us and greatly grateful for that money. We group normal group on a farm in North Carolina. Dimming cows, horses, motorcycle, and not your father. What about not getting.

I could miss set up so you did identity her house and you grew up in a country environment.

Just a normal life but God put his hand on you and now you're traveling around the world and were some of the places you've been in where some of the places you're going yeah this we been very blessed and willing to what we get invitations. I don't will spend the clothes in 00 why this looks good, yes. You know we we go where it invited inside this past year we were in was invited to India.

Been there many times at the dinner many times as the head of first this time I was denied entry into India was that and so I add messed up last was simply not writing all mass at Bo, I have a winter restricted area you have to go, present your passport to a certain individual I gave my passport to an individual to get it registered. I thought it was done.

They didn't do it and so when I did know his ignorance on my part and so when I left the country. They say will follow the procedures you can come back in. It's all cleared up now, but this was a good and didn't quite make it.

Went to Africa this year. The Kenya praise was in Australia early this year be going back to Australia this coming year. Just got back from Thailand and Japan. Japan God is really doing some unique and Japan right now, some things that most Christian pastors they are and Japan have never seen before Amber seen a great God really begin to do something my right hand which is never happened before seven Japanese Christians, less than half of percent, so a mega church would be 50 people. So it is not theirs. 12 mega churches here but great things were looking at what God so tonight we talked us about I were talking about about the Christmas story again. Specially it's that time of year mansard leaves less than two weeks away now so this is only time that I get to preach Christmas so I'm talking about that Herod tonight in the Wiseman thanks for being here will let's think well for being here everybody, Greg Laurie here. Thanks for listening to our podcast in the learn more about harvest ministries.

Just go to harvest.org. By the way, if you want to find out how to come into a personal relationship with God. Go to know God.org that's key NOW GLD.org