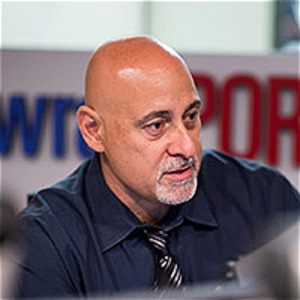 Carolina Hurricanes head coach, Rod Brind’Amour, takes some time to talk with Adam about their game opener tonight! He talks about what he's looking forward to and some concerns he has.

Are the Canes a circus act at this point?
The Adam Gold Show
Adam Gold

A big anniversary for the Carolina Hurricanes!
The Adam Gold Show
Adam Gold

Win streak…losing streak, what can we expect with the Penguins?
The Adam Gold Show
Adam Gold
Rod Brind'Amour, before we go any further, let me congratulate you on being in the inaugural class of the Hurricanes Hall of Fame.

Well, I appreciate it. I think it's great that we're doing this. We're going to start recognizing some of the guys from the past.

You know, I think it'll be a special night for those guys when we start rolling these out and fun for the fans and, you know, just get all around. I mean, I couldn't even nominate you. I'm kind of upset about that.

There's no question. All right. Seems like you've been off for a long time. You don't normally take well to layoffs. What are your fears about not having played a game in eight days? Yeah. I mean, I'm concerned just to start, you know, being a little, just a little sluggish, maybe a little slow off the mark.

You know, even practicing hard, but it's not the same. So we'll see. Hopefully, you know, that's not going to be an issue. I know we're playing a team that's just going to come at us as hard as they can. So, you know, it'll be interesting to see how the game goes. But, you know, I'm a little concerned about that for sure. It's also a team in Columbus with a lot of offensive firepower, adding Johnny Goudreau to a team that already had Patrick Lionade, Jacob Borchek, Zach Werenski. It just seems like they can definitely come at you offensively. For sure. I mean, you basically mentioned him.

So what was that like for you? Because there were a lot of guys fighting for not that many spots. It was tough this year.

I felt like because you said it, we were, you know, we had some question marks, I guess is the best way to put it, on where we were going to go, which way. A lot of good options, though. Maybe that's different than in the past years. You know, not saying we didn't have good options, but we had much deeper options, I think is a better way to put it. So we, you know, narrow it down and, you know, we have three guys that still in the roster can't play tonight. But we know that they're going to be integral in parts of it because we are pretty deep now and I like that.

There's no question there's deep, there's depth. There's also versatility. You have a bunch of guys who could play center, who could play wing. So it looks like Paul Stasny will line up with Jordan Stahl and Jesper Faust and we know he's not going to center that line because that'll be number 11's job. But the versatility of your lineup has to be something that you like. For sure.

You hit it on the head. I mean, we got guys that can move around a little bit and the lines will move around. I mean, I hope they don't. I hope that, you know, we can just throw them out because that means things are going well. But we know how that goes. It'll change and the fact that we have guys that can play kind of all over the place, multiple positions.

It just makes it a little easier. How do Seth Jarvis and Martine Neches fit into the system in terms of being potential face-off options? They took some face-offs.

I don't know if that was more by necessity or anything during the preseason, but are they part of your mix? I know Derek Stepan's in the lineup tonight and he'll be your only right-handed center. But how do Neches and Jarvis kind of alleviate any problems? Well, it's a problem if we don't have that right-handed center like you mentioned because it matters.

Such an advantage to have righty-lefties on the face-off circle. So we've worked with Nechi and Jarvis over the years or certainly Nechi a little bit more. It'll be interesting to see. They're definitely going to get a crack at taking it and if they can handle it, that's a bonus for our group. Where do you think this team is better maybe than other teams that you guys have put on the ice, especially for the opener, in your now five years as head coach?

That's a tough one. I mean, I hope we're better. You want to get better every year. I think a little more experience maybe, obviously. We've got more of a veteran group now. Not just that our young guys are growing older, but the additions that we've made. We've brought in guys that have certainly been around a little bit and get what it takes to win and how to prepare.

That stage is a career where winning is all it's about. So I would hope that that's basically how we're better. Better to handle all the ups and downs and just kind of keep consistent with what we're doing.

Alright, and final question. In a big picture kind of a way, what has this offseason been like in terms of using the disappointment of the end of last year for guys like Sebastian Ajo, Tevo Taravanen, Andrei Svechnikov? How do you think they've used the end of last year to get them ready for this year?

That's a better question for those guys, right? But I think there's always that when you don't reach what you set out to do on the journey last year, we didn't get there. It's just more fuel in the fire and hopefully, I don't know that it helps today, but certainly if we can get to that opportunity again to be in that opportunity where you're in the playoffs and you're playing.

I think that's where it really kicks in. They understand there's a long road before we can get there and it starts tonight. Let me ask you, just kind of following up in terms of Svechnikov, because I thought he was good, but the production wasn't there necessarily in the postseason. What are one or two things you can point your finger to in terms of Andrei's game that needs to just take another step forward? He's gotten better every year.

You're right. We'd love to see the points go in, but he creates offense every time he's out there. We always talk about his ability to play when we don't have the puck. That's a huge thing that he's improved for sure. There's still ways to go.