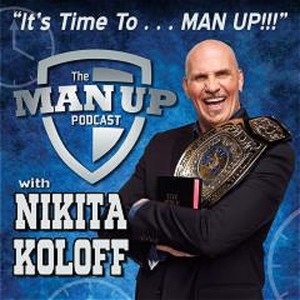 It's Time to Man Up! / Nikita Koloff

It's Time to Man Up! / Nikita Koloff

Nikita is answering some questions from fan, Jamie Zomer, who asked: Where are you from? And how has God and your family played a role in your life?

This is Michael Carbone with the Truth Network were partnering with Bible league international on open the floodgates Bibles for Africa in many parts of countries like Kenya, Ghana, Tanzania and Mozambique as many as 9/10 Christians are denied God's word by corrupt governments majority religions in poverty and remoteness five dollars and the Bible. $100 since $2500 sends 100 call 800 yes word that's 800-937-9673 thank you for caring. This is Robbie Gilmore from the Christian card I am king in pursuit where we hear how God takes your passion and uses it to build the kingdom your chosen Truth Network podcast is starting in just a few seconds. Enjoy it and share it but most of all, thank you for listening and for choosing The Truth Podcast Network network. This is the Truth Network nephew to call off their questions and answers Q&A would fall off the devil's nightmare. Welcome back to another segment of Q&A would call off questions and answers with the devil's nightmare. Hey, today's questions come from Jamie Zellmer Jamie Zellmer log you guys on social media, fans are that are really honestly the greatest and whether you follow me on Twitter, Instagram Facebook I just appreciated an ad you just spread the word out there. Nikita call off with the number one behind it. If you're not following me on a social media both on Instagram and Twitter.

The kickoff of the 1 behind it dial in and follow me. I try to post something positive every day. Try to encourage you and sometimes even challenge you, you know, and in your journey and your walking and so Jamie was not available. I would love to have call Jamie and just had the this conversation and answer these questions of just straight up, but so the these are the questions Jamie submitted and starting with where are you from Jamie go by the book not getting up getting Jamie, but if you want to know the whole story on the key to cool off. Nikita, a tale of the ring and redemption is how you can that that's one way, one what you got my website, website Nikita.net and and read about more of my story and/or by the book go to my store and and buy the book and get the whole story, starting with the earliest days I can remember, and Jamie says, where are you from, well, I'm not from Russia. Let me just break somebody's bubble burst somebody's bubble right there. I'm not from Russia held from the great state of Minnesota born and raised in Minneapolis Minnesota. The heart of Minnesota Minneapolis. We were in the in the early days in and what what technically you call the Minneapolis Housing Authority. What I affectionately call the projects of the ghettos of Minneapolis, because that's really what it was we are right on the outskirts of downtown. In fact I in my mind I can see downtown Minneapolis right now from from where we would play outside of our our our home and it and so Minneapolis we would eventually my mom you know she raise. I was the youngest of four and she she raised us up by herself. Identify was three and on and she eventually was able to move us out of the projects out to town, a suburb called Robbinsdale which is very infamous, in and of itself, Robbinsdale, Minnesota.

In fact, seven technically nine wrestlers well eight wrestlers and an announcer came out a Robbinsdale high school, not early on dating all the way back to the 1950s, a man named Vern Gagne who who was sitting amazing collegiate athlete at the University of Minnesota went on to form the AWA professional wrestling territory. Back in its day and and eventually out of Rob still came a guy name mean Jean Oakland one of the very infamous announcers in professional wrestling and then eventually came Mr. perfect, Kurt Henning, whose dad, Larry. The accenting wrestled for Vern Gagne but Mr. perfect or hanging ravishing Rick rude John nor ignored. He wrestlers nor the barbarian nor the berserker very dark so wrestled as crusher crus Jeff and also as as one of demolition up in WWF days, Tom sink, who wrestlers the sea man, one of the lesser-known Brady Boone wrestled and then of course the Russian nightmare. Nikita call off came out of Robbinsdale high school as well. They must've been in the water tower.

People asked me all the time hunted so many guys come from one high school.

Looking back at me.

As I mentioned I was the youngest of four and an older sister two older brothers and it really looked up to my oldest brother Stephen.

I should say I always remember you saying to me is is it as a youngster, you know, if you want to be an athlete, you know you you don't drink you don't smoke you know and and and and you know you need to focus on on you know what at whatever sport you choose to do. You need to fold and give it everything you have, you know, and so I took at the heart up just a cat you numb in single digits and I just took that the heart for my older brother really looked up up to him and and I am braced that hook line and sinker I think is the saying goes. I am braced that in it.

I can remember. I can remember it each 12 once we moved out to the suburbs. I I've I stumbled across his magazine called Ironman it was a bodybuilding magazine and I was just enamored by the guise of the magazine at that one day I want to look like one of those guys. I never say that at age 12.

One day I will look like one of those guys and I was an entrepreneur from an early age, I got a paper route will be moved out to the suburbs and begotten began delivering newspapers in early my own way, or in my own income and in The paper for about five years and I started and I watched I saw football on television the NFL and I got a dream and a vision for playing in the NFL. One day in and in these things became my passion and and and my family course older sibling so they grow up and move moved on and it was just me and my mom and and so you know football and in weightlifting just became my I just my present NMI family became my my sports teams, sports teams, Mike my seventh grade football coach Bill Burke became a first male role model in my life and can embrace me that Jerry McFarlane came into my life in ninth grade he was a health teacher, gymnastics coach and a professional bodybuilder.

Remember the Ironman magazine, so Mike Wohl so he took me under his wing, he became my next mentor and in several other football coaches on John Richman Irv nerd all Ross 40 all these coaches and all the skies became male mentors for me became like family to me and and became aware. So where there was a void because my older siblings laughed because my dad was never essentially in my life that became my family and played a key role in my success in athletics and eventually professional wrestling as some of you know are many of you know Ivan Cole off the story was. He was my uncle uncle I blood falloff and he became a mentor for nephew Nikita right so he became like family and then eventually I get married and have a family of four beautiful children who are precious to me and I have nine, now 99 precious grandchildren and so family is been important to me and then in 1993 and enter God into the mix right. I didn't grow up in all following God wasn't a Jesus follower.

I knew the stories I've heard the story how Jesus, this man lived. You know, was was nailed to a cross died and rose again and and and now lives at the right hand of his father and how he had a family family of God and show through business contacts. I was invited to church in 1993, the month of October 17 day I found myself in an altar surrendering my life to Jesus and all sudden I was adopted into the family of God and and and now also I have an eternal family so I have an immediate family. I have an extended family.

But I also have an eternal family, brothers and sisters in Christ and and that for me honestly is the most important family because to spend eternity with them like forever with them and my hope is my prayer is that my immediate family and my extended family make that same decision and and many of them have in surrendering their own heart and life to Jesus, so that they them become a part of the eternal family and so I really cherish and relish the family of God.

My eternal family because they all play such a key role in my life is so I hope that helps somebody out there today. Jamie man great questions from Jamie Zellmer and keep sending those questions in your keep submitting those questions you guys are coming with some great ones. They could be rusty related. They can be God related family related. You know you throw a couple singers and Iranian I'll do my best to answer those questions and hopefully you're available for me to call you and be able to have a conversation with you and so I can get to know you a little bit more as your getting to know me through all the stories and questions and answers with Cole off, so thanks for tuning in today to Q&A with rolloff.

Look forward to talking to you again next time. God bless you have a wonderful day. This is the Truth Network