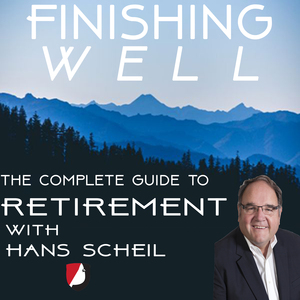 This week Hans and Robby discuss Social Security Solvency for retirees in the year 2022.

Don’t forget to get your copy of “The Complete Cardinal Guide to Planning for and Living in Retirement” on Amazon or on CardinalGuide.com for free!

You can contact Hans and Cardinal by emailing hans@cardinalguide.com or calling 919-535-8261. Learn more at CardinalGuide.com. Find us on YouTube: Cardinal Advisors.

How to Support Your Missionaries
MoneyWise
Rob West and Steve Moore

Uber With Jesus
The Christian Car Guy
Robby Dilmore
Important Note: These transcriptions are generated automatically and aren't perfect. We have generated them and made them available to aid in search and accessibility to the shows on our network. While we are constantly working to improve the technology and accuracy, we can't respond to requests to fix errors at this time.

Next your home. Your vehicle is where you spend a good amount of your life. So make the right exhilarating, introducing the all-new fully reimagined infinity QX 60 luxury SUV designed to help you conquer life in style. The all-new QNX 60 features ample cargo space available massaging front seats and a panoramic moonroof.

It's as functional as it is stylish and as versatile as it is serene visit infinity USA.com to check out the all-new fully reimagined infinity QNX 60. Now, with extremely limited availability.

This is Amy Thomas from the masculine journey podcasts where we discover what it means to be a wholehearted man your chosen Truth Network podcasts with starting in just seconds.

Sure, but most of all, thank you for listening and for choosing The Truth Podcast Network. This is good Truth Network welcome to finishing well brought to you by Cardinal guy, certified financial planner long shot.

I love the topic today. I think you're gonna enjoy it to you it's it's so is Social Security solvency doesn't sound all that wonderful but it is Social Security solvency for 2022 and so there's anything I don't know if you ever noted it but the hundred in the 18th Psalm you might call it the Palm Sunday Psalm because it's the one that they were quoting when they were going hosanna to the son of David, and blessed even comes in the name of the Lord and and those things are quote from the hundred 19 Psalm what you may not know about the hundred 19 Psalm is. It is one of the Psalms that Jesus would've sang while he was on his way to the garden of Gethsemane that night to pray right before he was crucified and certainly if you look deeper in the Psalm you're gonna find there is this words like bind the sacrifice to the courts of the altar and all these kind of words that show that that that Jesus was going to have to die for our sins, but interestingly, in the sixth verse of the hundred 19 Psalm it says the Lord is on my side.

When the Lord is on my side I will not fear for what can man do to me so I can imagine Jesus in this scene. Varieties can be crucified. The next day.

What can man do to me while he can crucify me, but it's not going to take away his life as he makes clear throughout the rest of the Psalm, but the point is an end and Paul would make the point in Romans eight where he said you know the Lord is for me. Who could be against me. What could man to possibly to us like we have nothing to worry about.

And so the first thing we want to get across right when were talking about the so security solvency is you know we we talked about often on this show and Hans makes a point of all these seven worries with the idea we want to take away these worries and we don't want to we worry is is not what God has in mind and so he has all this under control. To begin with, but I think that when you see that, but what we report today on so security 2022 that there there simply is nothing to worry about is there Tom, I think that was the goal of the show and we have a YouTube video that goes over the same things is really talking about putting some data behind the idea that Social Security is going to run out of money.

I mean I would be willing to bet if you went out on the street and you interview people and asked them and took a survey of their thoughts on Social Security and will be there when they retire. A lot of people that that know it won't. I can't trust that and our goal today is really walk during this kind of youth and people's concerns is that it is going to be damage going to be there for you. This is a great thing that's been set up.

It provides income for our seniors for our windows for orphans that it is really helpful for everybody and it's amazing. And you know before I met Hans, I probably would've been in that group.

You know that he speaks so clearly, and he takes the time right to did read the report, it comes out every year explains all the details and I can tell you that was amazing to me what we find in this report, I'll never ever forget the first time we went through this is our gender this before thinking really be amazed at what what Tom has for you, but you know about Don sure did you feel the same way the first time you read the reporter you're familiar with what Hans teaches on this yet made Hans to talk to me about this) within the same camp. He was just confused and my mentor by looking at the numbers really put some teeth behind that, if not just talking to truly looking into this and so what we have on our website and you can Google and find this, but if each year. Social Security comes out with a report that required by law to do the report to Congress to really lay out you know how Social Security is doing so with very long.

I don't recommend you read every word of it.

My fear really just way into it.

But what we want to do today is really pull out some of the key point here initially talk about what the report seven, give you a summary of what's in there and so one of the things I just one of the top line number that I think we should start with is how much is in the trust fund at the end of last year. End of 2021. There is $2.85 trillion in this trust fund for this is money that they have collected that they have saved to bend on future benefits, and so think about that number first, second, 2.8 trillion that of a lot of money that they have saved up that thing that the defendant acted safe within US bonds and so it's not real aggressive.

It's not risky. There some people that that that should be more risky to get more return, but I think it's good to be conservative on those definitely don't want take a huge loss in the either and so we have 2.85 trillion, which is about 1/10 of the US the total US debt that we have and I know people know that numbers is large and so there is a lot of money in the fund.

There concern interrupted, one of the things that I was assuring. I never really had put together in my mind that Hans pointed out in your video is that that is considered part of our debt so 1/10 of our debt is actually what we owe so security all of us right. I don't know if that's considered part of our debt, but I think the point he was making is that it was just to give some context of the amount of money we have today is the 10th of what is our debt value if left in the trust fund of the is an asset essentially that we can spend for future use.

Right. But since when does, but since it is owed to the American people right that it was not really is not yet a minute if the amount of money that will be owed in the future but it's not tied to a specific thing okay so I admitted that the point being, there is a lot of money in that account available for future use and how they how we get to that mount Shem and how Social Security is funded through payroll taxes every time you get a paycheck. You look on that paystub. There's a line item for Social Security taxes they withhold it they come out of every paycheck and I get it into the fund and so the money comes in from picked payroll and he goes out for benefits, and so in 20 2110 payroll tax brought in $980 billion of money from just the taxation for Social Security that one piece of of the revenue that it brought in from that year, then you add to that the interest from the amount that in the trust funds that 2.8 million. If invested, earnings from interest earned $70 billion of interest on the trust fund that gets added to the 980 and then on top of that for higher earners there's taxation on Social Security as well for Social Security. If you earn its tax base of your other income and as you earn other money that those benefits get packed and I get put back into the Social Security system. So those are the three sources of revenue for Social Security in the year 2021 and the net result is $1.08 trillion of revenue that it brings in for the year and for that fund enough you think of it from the balance sheet of money is bringing in in 2021. Every flip over to the other side and looked at what it's paying out in 2021 for the surgeon to be benefits for retirees, widows, you know minors who have died there kind of documented all sorts of people that qualify under this, but the amount that it paid out in total was $1.13 trillion of payments for those of the benefit paid out in a debt higher than the revenue and that's where that different.

And so the shortfall in 2021 was $56 million, which that sound like a lot of money, and it is but compared to the $2.8 trillion is still just have a drop in the bucket so 2021. This is really the first year that I can remember them actually taking more out than they brought in and revenue naturally with baby boomers never getting to the point of the retiring and that this is been a known thing that can happen is eventually going to start pulling more money out that it's going in, which will draw down the trust fund and so that's really what people want to talk about this being an issue in this thing to be worried about. That's really what they're referring to is the fear is eventually there will be money in this trust fund to pay the benefit the people of current right that we, as you said that up until now I don't recall a time that they ever did that. They just been added to it.