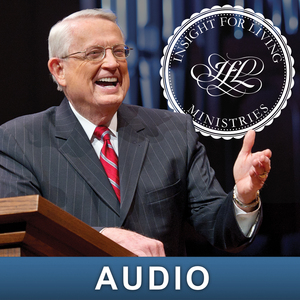 When Doors Slam Shut, Part 2
Insight for Living
Chuck Swindoll
Few things are more discouraging than having a door slammed shut. You've taken all the right steps, measured your plans with prudence. You feel like God is leading you in a certain direction. It's exciting. And then, just when you assume that everything is working in your favor, something unexpected occurs. The door is closed, and you're back where you started. Know the feeling? Well, today on Insight for Living, Chuck Swindoll helps us understand how to cling to hope when surprises come our way.

Chuck titled his message, When Doors Slam Shut. Our God is full of surprises. It's impossible for you to guess ahead of time what he is doing and where he is leading and what his plan includes. And so our response to him is simply one of quiet and consistent obedience.

It's difficult, especially if you're strong willed, because you have a plan and there's everything right about planning in your life, thinking through what you should do and what it should include. However, the stronger the will, the more difficult it is for us to surrender to his will when it differs from our plan. And he wants to lead us in the way we should go. In fact, the psalmist says he guides us with his eye on us. If you're guided by another's eyes, there are not words.

There's only the silent movement of the eyes. And you must be looking into the face of the one guiding you. We find Paul and Silas in need of God's guidance as several doors closed because the Lord's plan was different than what they had anticipated. His plan was magnificent, but it began with magnificent closed doors. And that's what we read about here in the 16th of Acts, verses six through 10. Just a few verses right in the center of the chapter as these two missionaries seek God's mind in light of what he has just done in closing the doors they thought they would be walking through.

However, his plan is always best, albeit surprising. And that is what becomes, in this case, the epical event no one expected. Acts 16, verse six, Paul and Silas traveled through the area of Phrygia and Galatia because the Holy Spirit had prevented them from preaching the word in the province of Asia at that time. When coming to the borders of Missia, they headed north for the province of Bithynia. But again, the Spirit did not allow them to go there. So instead they went on through Missia to the seaport of Troas. That night, Paul had a vision, a man from Macedonia in northern Greece was standing there pleading with him, come over to Macedonia and help us.

So we decided to leave for Macedonia at once, having concluded that God was calling us to preach the good news there. I want to dedicate this message to you who are right now living with closed doors. You can't explain them. You would not have predicted them. You're facing them and they are inescapable.

You're not able to push through them. So what do you do? We'll talk about that in our time together. You're listening to Insight for Living.

To study the Bible with Chuck Swindoll, be sure to download his Searching the Scriptures studies by going to insightworld.org slash hope. And now the message from Chuck titled, When Doors Slam Shut. It's hard for any of us to believe that a closed door is ever a gift from God. I mean, we don't like closed doors. We like open doors. We don't like red lights, we like green lights. We like wide open entrances into great opportunities, but detours and dead in streets are irritating and they're never enjoyable, certainly not at the time.

This is not only true on a road that's true in life, but sometime those detours and dead in streets are absolutely divine gifts from the one who loves us. It was back in 1959 that I first stepped foot as a first year student onto the campus of Dallas Theological Seminary. Cynthia and I have been married a little over four years. We had no children. So when we arrived, she was able to work and to help us with our expenses that we had as students at the school. She found a job in a small accounting firm. Really only two people were in the firm, the CPA who owned the firm and then she was there to assist him in any way she could and it was a simple job, but it was an important job because often she would be working there without him for he was frequently on the road, traveled quite a bit in his firm and as a CPA. He and his wife had two small children, little busy boys who took extra time and his wife loved it when he was able to be home and help with them. They also enjoyed entertaining and even though God had given them the family and it was growing, they still enjoyed having couples over for an evening and so it was on this particular weekend they had planned to enjoy a nice dinner with friends. However, he was going to be on the road and it was of concern to her that he would be back in time to greet the guests and be there for the meal that they would enjoy together.

He assured her that that would happen. He had arranged the flight so that he would get home, it was a little close, but he would land at Love Field, that was the only airport at the time in the Dallas area and they lived not far from there and so he could get from the airport to home rather quickly and would be home in time to greet the guests and help get the boys to bed and get the evening underway. This was back in the day when tickets were paper tickets. No one had heard of electronic ticketing or much of electronic anything at the time and so you literally carried on board a ticket that not only marked your seat that was chosen but also the date and the time in which you had purchased it.

Now the downside of that is on the rare occasion when someone else purchased a ticket and chose the seat in a full flight, that person could bump you if he or she had bought the ticket ahead of you. So here he sits, let's say in seat 12C, all ready to make his way home from Florida back to Dallas and he looks over and there stands a flight attendant next to him with a paper ticket in her hands and the other passenger waiting to take seat 12C because that person had purchased his before the CPA had gotten his ticket. Hardest part was to call his wife when he got off the plane and tell her that he had been bumped but he said I've got my luggage, didn't check anything and I'll take the very next flight, I'll be home during your meal and we'll be there to see everyone off when we finish and enjoy the evening with them, no problem. Well of course she was disappointed when the guests arrived, they were disappointed not to have him with them because it would have just made the evening complete and he slumped down the seat at the airport awaiting the next flight as we've all done from time to time, disappointed at the change in plans. However late that same night everyone was greatly relieved when they learned that that original flight crashed in the Gulf and everyone on board perished including the man sitting in of course seat 12C. When all of this dawned on them of course they were grateful that that door had closed and he didn't make that flight, that fateful flight that never made it back to Dallas. Cynthia and I learned an unforgettable lesson through that experience of the CPA head.

We never argue when a plane has mechanical trouble and it's put off the line and you have to get off the plane and take another flight, we just get off the plane and never say much about it as we wait for the next flight that opens. I suggest you form that same habit for closed doors always have a reason. They will not be that dramatic but there's always a reason and you may not know the reason then. It's a lesson to be learned that even though disappointed at the time there's a magnificent gift from God in the closed door. Paul and Silas had that to learn. They had their hearts like good missionaries set on taking the message to those who had never heard it before and nothing thrills a missionary or anyone who loves Christ like opening the truth of the gospel to someone who's living his or her life in spiritual darkness. What makes this interesting and even more complicated is that Paul has been on another journey earlier and it was met with wonderful success from one place to another and yet another at another before he returned to his home church in Antioch to give a report along with his traveling companion Barnabas as they told of what God did in that first journey. You could trace the journey as you go back to the 13th and 14th chapters of the book of Acts. There's an important council that was held in chapter 15 recorded there and then toward the end of that chapter plans are being made for a second journey that Paul would take. He had planned earlier to go with Barnabas. That door closed an interesting set of events and then he chose Silas as his traveling companion and they decided they would go back to the places where Paul had been on that first journey and they would see how the churches are doing and they would see if God had been working in the lives of those that they had led to Christ on that original journey and sure enough it was good news. You'll see it in verse 5 of Acts chapter 16.

So the churches were strengthened in their faith and grew larger every day. What an exciting thing that must have been when Paul returned bringing along with him Silas and they realized that the Lord is using their earlier work to build the work there in these new places. Well naturally because of that Paul was anxious to go on into regions beyond and we read of that as we read in verse 6. Next Paul and Silas travel through the area of Phrygia and Galatia.