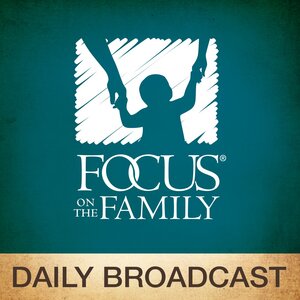 Laughing, Loving and Lasting With Your Spouse

Laughing, Loving and Lasting With Your Spouse

Pastor Kevin Thompson believes couples can have happy marriages, if they are intentional about maintaining a healthy, godly relationship. He shared a great story about the 70-year marriage of his grandparents, who lived hard lives but had an enduring love.

Receive the book "Happily" and the audio download of the broadcast "Laughing, Loving and Lasting With Your Spouse" for your donation of any amount: https://donate.focusonthefamily.com/don-daily-broadcast-product-2022-10-31?refcd=1507401

COVERED TOPICS / TAGS (Click to Search)
recognize that mourn sorrow the sadness sadness the heartache transparency and honesty ethnicities and countries Marriage gonna Kevin Kevin Thompson God
YOU MIGHT ALSO LIKE
I remember just getting like really panicky like no I have to figure this out right now because my my son's gonna come home from school in like two hours and I have to know what to say. When Holly's son was considering suicide she called a focus on the family counselor. All those years I'd been listening to focus I was thinking about how they were like that practical guide for me that was sound advice I could get from them.

I didn't really know where else to turn. I'm Jim Daley working together we can rescue hurting parents like Holly and give families hope. We need the truth that focus on the family brings into our minds and into our homes. We need that if we're gonna raise up the next generation of believers to walk in obedience and to walk in the truth that God loves us. Donate today at focusonthefamily.com slash hope and your gift will be doubled. Marriage is gonna have its hardships. Some are gonna be self-inflicted.

Some are just for fallen people that live in a fallen world and if we have this ability to endure together to trust God in the midst of the difficult seasons he is going to bless us in ways that we can't even begin to imagine. That's Kevin Thompson and he's with us today on focus on the family. Your host is focus president and author Jim Daley and I'm John Fuller.

Alright John here's a question for you. Do you and Dina laugh a lot? We try. Okay so my goal is to help her laugh at least once a day because of some bad joke or a pun or a lot of times it's just a funny memory that I can pull up from early years.

I like that goal. I think humor is so important in marriage really to get through some even rough spots it's fun to sometimes let some of the pressure out and make light of a situation when the timing's right. There are inappropriate times to do that.

Yes. But you know what here focus on the family. We want to give you a marriage tune-up and you know this is the the moment where your marriage is in a pretty good place but you can always do a little better.

That's the kind of nuts and bolts information we're gonna give you today. We help couples every day with challenges in their marriages and I thank you the supporters out there listening for stepping up and helping us to do that day in and day out with counseling intensive programs for marriage all the the toolkit that we have for everybody to tap into. Today we want to help you learn how to make the overall tone of your marriage happier and more committed and I think that's a great goal. We've invited Kevin Thompson author of Happily eight commitments of couples who laugh love and last to give us some insights into marriage. Yeah and Kevin is the married life pastor at Bayside Church outside of Sacramento California. He's also a marriage and parenting conference speaker and a blogger and he's married to Jenny and they have two children.

Kevin welcome to focus. Well thanks so much for having me. Now you're pastor.

I am. First and foremost. So you've seen a few couples in trouble. Oh there's no doubt.

The pastorate is fascinating from a relationship standpoint because you were you were there from the very beginning when couples begin to date and sometimes you're making calculations of whether or not that's gonna make it. But you never speak of this. Never.

You always hold that. How accurate are your predictions? Well you know I do have there's only one place in which I make predictions to Jenny my wife and that is with the wedding cake and so it's not with dating but it's with the wedding cake at the reception and I have I have found that if you will watch that you can begin to see if the couple is going to make it or not. Now it's not whether or not they smash the cake or don't smash the cake but one of my very first weddings I did the couple did the she gave him some cake and it was really smooth and he gave her some cake and really smashed it in and you could tell she was irritated and then she smashed it back and then he got irritated and they actually went to the ground and I looked at the person I was standing next to and I said is that normal because this is only at my second wedding and that couple was divorced within six weeks. Oh that's sad. Six weeks.

So this is the predictive model. No and so it's not whether or not you smash or not it's whether or not is there respect in that moment is there playfulness in that moment and so to this day whenever whenever somebody sees me at the reception they'll look at the wedding cake and then they'll look back at me to see and I'll just give kind of a thumbs up thumbs down of what I think. So it's become a bit of a game.

It's kind of a game. Well share with us you mentioned Jenny your wife you know let's start with your own how did you meet what happened and did you smash the cake thing. Very gentle with the cake. So Jenny and I went to Oklahoma Baptist University together actually met her before I went but she completely blew me off and so I was speaking at her church my joke is she was the only female there over the age of 14 and under the age of 40 and I asked a friend to introduce me and he did he introduced me and said Jenny this is Kevin Thompson he's gonna go to OBU next year she was already there and she goes oh that's great you'll have a great time and walked off and that was our initial meeting and two years later we were reintroduced and then I asked her out we begin to date. Had you ever forgotten about her? No. I'm just making sure. Well I went to OBU just with one focus and that was to find her again and to make sure to make sure I made her mine and so on our very first date I asked her out and she told me that she would never marry a pastor she would never move for a man and she would never marry somebody younger than her and two years later all three of those things were found false. That's funny that you kept that checklist. That's no oh and I remind her often.

Okay maybe we need to help you. Your grandparents were married maybe as long as any couple I've ever heard of but how many years? That's exactly right. We buried my grandmother on the 70th anniversary of the day my grandfather went to get the marriage license. Wow I mean that is a long time. What did you learn watching them? You know to me my mama and papa were inseparable I can't even say mama without saying papa and my grandmother was the strongest person I've ever met. I'll never forget she pulled the biscuits out of the oven and half the time wouldn't even use a potholder and I didn't I didn't understand it.