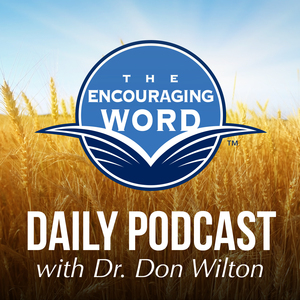 R321 How to Handle the Enemy, Pt.3
Encouraging Word
Don Wilton
Important Note: These transcriptions are generated automatically and aren't perfect. We have generated them and made them available to aid in search and accessibility to the shows on our network. While we are constantly working to improve the technology and accuracy, we can't respond to requests to fix errors at this time.

That's today's topic is reopen God's word together here on The Encouraging Word will be had in the book of John in just a moment.

But as we open the word. We are also opening our hearts to pray with you to connect with you keyboard to keyboard on our website at tewonline.org and G that T.

W online.org or this phone number yes were having a commitment to having conversations together, praying together on the phone at 86689866899673 Alex prepare John chapter 2 study God's word together with Dr. Don Wilton on today's message called extreme makeover plan for you. He has a plan for me has a plan for his church how I lost you a question and I'm going to ask you to respond you're ready. How many of you would readily admit that you need a makeover. Thank you operation.

I'm sure what I like about it is it's clean and it gets a hold of your heart. And it's true and it's real and shows this group of people led by this fellow with funny hair and a megaphone and they select somebody or some family that have gone through some kind of difficulty. For example, I remember one of them their daddy had lost his life in Iraq and the family was struggling to be able to maintain their household. Another one that I remember the pops into my mind was a young mother died prematurely and left the young father with like four or five young ones and it was a real struggle in during all of this, they house the actual house just just becomes too small and cluttered and it deteriorates and and it's just not quite adequate so the group comes in and seems the family off somewhere. We'll watch it on television and then off for a while. The family comes back and I have this big RV this beautiful RV and the fellow with a megaphone says driver move that bus and the bus moves out the way and the family looks at an extreme makeover and it's just one of those joyful experiences because you enter into the joy of that fresh beginning and there's just nothing like it.

It's a breath of fresh air and groups hearts. I believe that the Bible speaks very clearly about moving that bus, and the Lord Jesus Christ himself presents to us not on one occasion, but on a number of occasions I plan of action for us, tells us what we need to do in order to have a an extreme makeover now folks I want you to know something today. I truly believe with all of my heart that God is going to speak to you at the things that you need to deal with. He's going to speak to the church going to speak to our church and your church no matter where you all how long you've been there. What you've accomplished going to speak to you and me about our personal lives.

God is going to make that application.

I'm going to try not to make too much of an application because I want the Lord to speak to your heart.

I don't want to be in the way of that. But I do know that in John chapter 2 God gives us a plan of action for an extreme makeover and I made awesome that this plan of action be put up for you to see right now I want the whole plan of action. There are six parts that the entire message to what I'm going to talk to about I want to just leave that up the right, throughout this entire time that way to get this is exactly what the Lord is showing us in this encounter that we find in the life and ministry of the Lord Jesus Christ. Now going to say this very quickly.

This is going to come in bullet form every year the Jewish people celebrated the feast of the parts over and they still do today. It's incredible what were they celebrating what would they come commemorating when they went to the temple in Jerusalem that time when remember the Jewish people, the Israelites were in bondage in Israel. Did you know that they were in bondage for 400 years. I think I got slapped, worn out, don't you think I mean they got to the point at which they believe nothing more could be done hundred years and yet God's chosen people in Israel in Egypt in bondage and God save the angel of day to get the attention of the Egyptians.

He said yes. What's gonna happen. I want you to kill to slaughter a lamb. I want you to take the blood of that lamb and I want you to paint the W goalpost and when the angel of day comes through the streets of your suburbs and he sees the blood painted on the door post he's going to parse over your home and your firstborn will not die of folks. We have a wonderful picture of God's grace in Jesus Christ. The salvation that we have through the shed blood of Jesus. That's exactly what happens to you. Did you know that when you give your heart to Jesus. There is a sense in which, because of the shed blood of Jesus on the cross, your life, your heart is painted in the blood of the Lamb. The Lamb of God, so that when the angel of death comes he's gonna pause so you because the wages of sin is death.

That's the same cost on every person because of sin, but the gift of God is eternal life through Jesus Christ our Lord. When you give your life to Jesus Christ. Your life is painted your washed by the blood of the Lamb and the angel of death parses you because you have received eternal life, and so every year the Jews celebrated commemorated the Passover, but I have to come from everywhere. They traveled long distances and everybody kind and they also have to pay a temple tax when they got the and when they pray they temple tax, they could only use coinage that was of a particular silver and had to come from the region of Tyre Tijuana already which is in labor and in the day or it have to be specific Jewish coinage because of the quality of the silver, and so there was a group of people that set themselves up to extremes they coinage but they also let me know. Very, very heavy feed on those two extremes, like when you travel to Europe and you need Deutsche Marks in Germany and you exchange a US dollar for the Deutschmark and you go to a bank in Frankfurt Germany and I charge you what a fee.

Well the fees that they charge were exorbitant. Not only that I had to slaughter an animal it had to be a cow. It had to be above would have to be a sheep well they bring them with them.

I couldn't back to travel miles and miles and so there was a group of people that moved into the temple. I said we got an opportunity and someone originally began as a full act of worship. Their plan was that people would come and celebrate the presence of the Lord. Over time, became scooted and infiltrated by business and an activity that was anything but pleasing to the Lord.

It was not part of God's plan and then folks get distracted the people from what they were supposed to be doing and they were profiteers.

These merchants label opportunistic they were making money and so what happened folks is that the whole worship experience got sidetracked and he has Jesus it's read about a quickie. John chapter 2 and verse 13 when it was almost time for the Jewish thought so but Jesus went up to Jerusalem, and in the temple courts. He found me in setting capital sheep and doves and others sitting at tables exchanging money