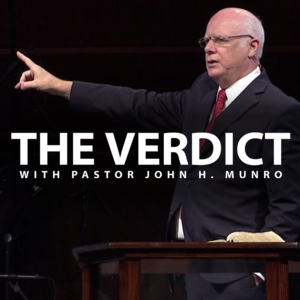 5th Sign: Who Else Can Walk On Water?, Part 1
Fellowship in the Word
Bil Gebhardt

The Cleansing of the Temple
The Bible Study Hour
James Boice
Important Note: These transcriptions are generated automatically and aren't perfect. We have generated them and made them available to aid in search and accessibility to the shows on our network. While we are constantly working to improve the technology and accuracy, we can't respond to requests to fix errors at this time.

Open your Bibles to Matthew chapter 14 over those of your listening Riverside were going through the book of Matthew and today we come to the first 12 verses of Matthew chapter 14 in Matthew 13 we dealt with eight stories eight particles told by Jesus, and he told these parables, these stories to help us understand the meaning of the kingdom of heaven.

Those who have repented and believe in the gospel are not following Jesus Christ must understand that Jesus is King is King of Kings and Lord of lords is to be king of your life. You are to follow him irrespective of the cost you to follow him.

Whatever he may lead.

In fact, this commitment to the cause of Jesus Christ is so strong that one of these early apostles apostle Paul describes himself as a slave as a servant of Jesus Christ going to be a slave to be a slave of Jesus Christ, and that means is we follow Jesus. We follow him, not on your totems by the news. Not your will, but his will that is as a slave, following Jesus Christ. We are totally in his hands to do his will. We saw last time. As we concluded, Matthew chapter 13 that Jesus is rejected by his home time and I was become into the opening verses of Matthew chapter 14 we will read of the tragic death of a great man.

In fact of the forerunner of our Lord Jesus Christ.

A man prophesied in the Old Testament, a man of whom Jesus said of those born of women that has arisen none greater than John the Baptist yes were going to read of the day the cruel death of this great man of John the Baptist in Matthew is putting this in his gospel not only to give us a factual historical account of the death of John the Baptist, but to provide an example. An important example that following Jesus is possibly very very unlikely that you're going to lose your head because your following Jesus Christ. What following Christ for each one of us is costly as we will learn so let's read this very interesting story of the death of John the Baptist, and I think it will help us and encourage us to trust and motivate us to be dedicated followers of Jesus Matthew chapter 14 then in the reading from verse one. The reading from the English standard version, which is the version we use at Calvary and the is a good modern version.

Matthew 14 in verse one that at that time Herod the tetrarch cared about the fame of Jesus and he said to his servants. This is John the Baptist he's been raised from the dead. This is why these miraculous powers are at work in 400 that sees John and binds him and puts him in prison for the sake of Herodias, his brother Philip's wife because John had been saying to him. It's not lawful for you to offer, though he wanted to bring them to dad, he feared the people because they held them to be a prophet but when Herod's birthday came the daughter of Herodias danced before the company and please turn it so that he promised with an oath to give her what ever she might as prompted by her mother. She said give me the head of John the Baptist here on a platter and the king was sorry because it results in this case, he commanded it to be given. He sent and had John beheaded in the present and his head was brought on a platter and given to the girl and she brought it to her mother.

Verse 12 and his disciples came