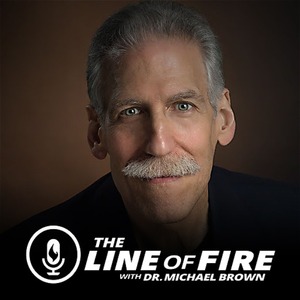 The High Holy Days Are Upon Us

The High Holy Days Are Upon Us

Did Israel Assassinate a Palestinian Reporter?
Line of Fire
Dr. Michael Brown
Important Note: These transcriptions are generated automatically and aren't perfect. We have generated them and made them available to aid in search and accessibility to the shows on our network. While we are constantly working to improve the technology and accuracy, we can't respond to requests to fix errors at this time.

The following is a prerecorded program. The high holy days are upon us. Time for the light a fire with your host scholar and cultural commentator Dr. Michael Brown your voice for more insanity and spiritual clarity. Call 866-34-TRUTH to get on the line of fire and now there's your host Dr. Michael Brown has no in biblical times. It is the first day of the seventh month.

The day of the trumpet blasts the sounding of the shofar followed 10 days later by young people were David Tolman this five days after that the weeklong celebration of Sukkoth tabernacles but as centuries evolved, sentries went on, there were calendar changes in this is become the beginning of the Jewish new year used to have that happen this debate in terms of exactly what the sequence was how far back this goes but this much we know that by the time of Jesus. There were different at different years, different calendrical gears.

For example in in most countries you have school year is different than the calendar year right school year starts end of August beginning of September and the snow there may that's the school year. You have a tax year you know fiscal year, things like that will that's what happened. You had different different years in ancient Israel New Year's and this became the one that was doubt the new year, but it's not like in the West, the secular New Year's celebration and people partying it's it's quite the opposite.

Some of this will be familiar to you, but I know there's so many folks that that listen for the first time or catch us for the first time or new to our ministry so want to step back and share a little bit more with you. I won't be taking calls today but I will be answering questions that were posted earlier in the week. Some Jewish questions of