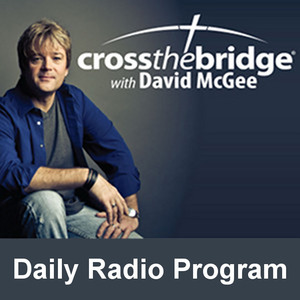 Singing And Praying
Encouraging Prayer
James Banks
Important Note: These transcriptions are generated automatically and aren't perfect. We have generated them and made them available to aid in search and accessibility to the shows on our network. While we are constantly working to improve the technology and accuracy, we can't respond to requests to fix errors at this time.

Welcome to cross the bridge with David Magee weekend edition Pastor David McGee is internationally recognized for his unique conversational verse by verse and chapter by chapter teaching through the word of God. We encourage you to visit, cross the bridge.com to study the Scriptures along with Pastor David right now open your Bible to the Old Testament book of Job and follow along for today's teaching in this series of special weekend edition programs. Pastor David has been teaching lessons from the life of Job. Job is one of the oldest books in the Bible we are finding out that what needed to be learned. Back then, still needs to be learned by us today as we continue studying chapter 34. Now here's Pastor David were Job, chapter 34 let's pray God, thank you, thank you for this evening.

Lord, thank you for your steadfast love.

Thank you that we have a Savior who will not quit on us.

Lord help us to encourage others to get out. Lord, help us not to kick people when they're down helpless not to be the accuser help us to be the encourage.

Thank you that as we look into the future God. We see things that are going wrong. We see things are going to get worse. The God we also see an end to harvest. We also see the gospel being spread around the world. We also see that we are a part of your entire implants. We thank you for we see that you are pouring your spirit now on all/May we love as many as we can into the kingdom. Thank you again for our time together folks here folks align Lord we ask the things that we say the things that we do will ripple out around the world. We ask that you open our hearts to your word and open your word to our hearts in Jesus name. Everybody said a man a man Job, chapter 34 verse one LI and further answered and said here my words you wisemen give ear to me, you who have knowledge for the ear test words as the pallet taste food is in the picture first for let us choose justice for ourselves.

Let us know among ourselves what is good for Job is I am righteous, God is taken away my justice. Should I lie concerning my right. My wound is incurable. Though I am without transgression. What man is like Joe who drinks scorn like water who goes in company with the workers of iniquity and walks with wicked men. Verse nine for he has said it profits the man nothing that he should delight in God. Verse 10 therefore listen to me you man of understanding. Far be it from God to do wickedness and from the Almighty to commit iniquity.

Surely God will never do wickedly. Nor will the Almighty pervert justice who gave him charge over the earth who appointed him over the world if he should set his heart on it if he would gather to himself, his spirit and his breath all flesh would perish together and man would return to the past. If you have understanding here this listen to the sound of my words. Should one who hates justice govern where you condemn him, who is most just for Satan is it stating this say to a king, you will worthless and the nobles you are wicked because, in essence, that's what Job is saying about God that God is the one with the issue in Job is the innocent one that is amazing is that sound understand. That's the argument of most people in the world.

They don't say it like that but so in all, I had a problem with the Bible and they don't really mean they have a problem with the Bible is much as they are trying to say they think the Bible has problems. Verse 19 for he is not partial to princes, nor does he regard the rich more than the poor for they are all the work of his hands in a moment they died in the middle of the night, the people shaken pass away the mighty are taken away without a hand. Verse 21 for his eyes on the ways of man and he sees all the steps. There is no darkness nor shadow of death, were the workers of iniquity may themselves, for he need not further consider a man that he should go before God in judgment he breaks in pieces mighty men without inquiry and sets others in their place.

Therefore, he knows their works. He overthrows them in the night and they are crushed.

He strikes them as wicked men in the open side of others because the turned back from him.

They were faithful they were loyal, turned back, it would not consider any of his ways so that they calls the cry of the poor to come to him, for he hears the cry of the afflicted.

When he gives quietness who then can make trouble.

The way God gives peace who can disturb that PC gives when he hides his face, who then can see him, whether it is against the nation man alone that the hypocrite should drain less the people be ensnared for. Has anyone set the God I have borne chastening and I will ascend no more. Teach me what I do not see if I have done iniquity, I will do no more.

Should he repay it according to your terms. Just because you disavow it you must choose not.

I therefore speak what you know men of understanding say to me wisemen who listen to me, Job speaks without knowledge is words are without wisdom. All the Job or tried to the utmost, because his answers are like those of wicked men free ads rebellion to his sin, he claps his hands among us, and multiplies his words against God while second Peter chapter 3 remind us knowing this first, that scoffers will come in the last days, walking according to their own license and where is the promise of his coming for since the fathers fell asleep, all things continue as they were from the beginning of creation or the new living translation. Most importantly, I want to remind you that in the last day scoffers will come mockingly choose and following their own desires, they will say what happened to the promise that Jesus is coming again from before the time of our ancestors.

Everything is remain the same since the world was first created.

You know it almost seems like some of those people are in the church these days and all time just gonna keep going on or there's actually a theology of belief now that man and this is in the church that that man is going to turn the whole thing around is not even going to be a second return of Christ. That's gonna usher in the millennial reign skill of the that we finally get a clue. She hurried out and we don't even need God usher in the millennial reign. That's all.

Just like man on it is life lesson. Keep doing good.

Keep blessing people and begin blast and don't get rattled again. Imagine being one of these stargazers and what you are doing is was very important and yet it was probably very easy for others to belittle that member years ago during the Cold War, is a story when around that they were having a hidden LANDesk on Bible study and two armed Russian soldiers came in and was it you know I were in the code. If anybody wants to recant and leave will could you leave now is about seven people there to the people deny their faith walked out the remaining five I lined up against the law makers machine gun fire going off at the neighbor, surprise it a workshop. They turned around and looked at the soldiers who said were believers tuple. We had to know who we could trust were not in those days.

Right now those days could become an honest, I'm not looking for fair weather trends I'm looking for committed people.

Did you know that New York City right now that is US in the transgender person that the government will find you $250,000 per incident.

If you do it four times, they will find $1 million